Freezing drizzle and freezing rain occur when supercooled water droplets fall onto the surface of an object (electric conductor, structure, or tree limb) with a temperature below freezing. In the case of freezing rain, light precipitation events over a long duration, greater than six hours, are much more concerning than heavier precipitation events, with moderate to heavy freezing rain. One reason being the heavier event usually lasts a short period of time and the rate of precipitation is such that adequate time for ice formation and accretion is inhibited. 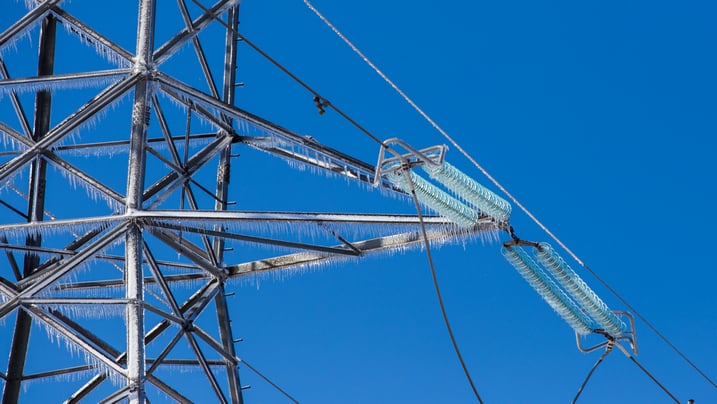 Wind speed during an event of 10 mph or higher is an important factor in the ice accretion process. Higher wind speeds will generate larger accumulations of ice. The wind speed is essential to ice formation because it dissipates the surface heat and heat from UV radiation. Ice can still occur at low wind speeds, but the accumulation will be less.

The wind speed plays a second role. In the absence of significant wind, ice forms on power lines in a teardrop shape. During events with significant wind, power lines oriented perpendicular to the mean wind direction will accumulate more ice in an airfoil, or aircraft wing shape and when the load is great enough and winds strong enough, the ice accumulation shape can promote lift and the lines can begin to gallop. Galloping can cause wires to eventually touch, resulting in a fault, or even prolonged power outage if faults keep occurring. The increased movement can also cause cross-arms to break bringing powerlines to the ground. 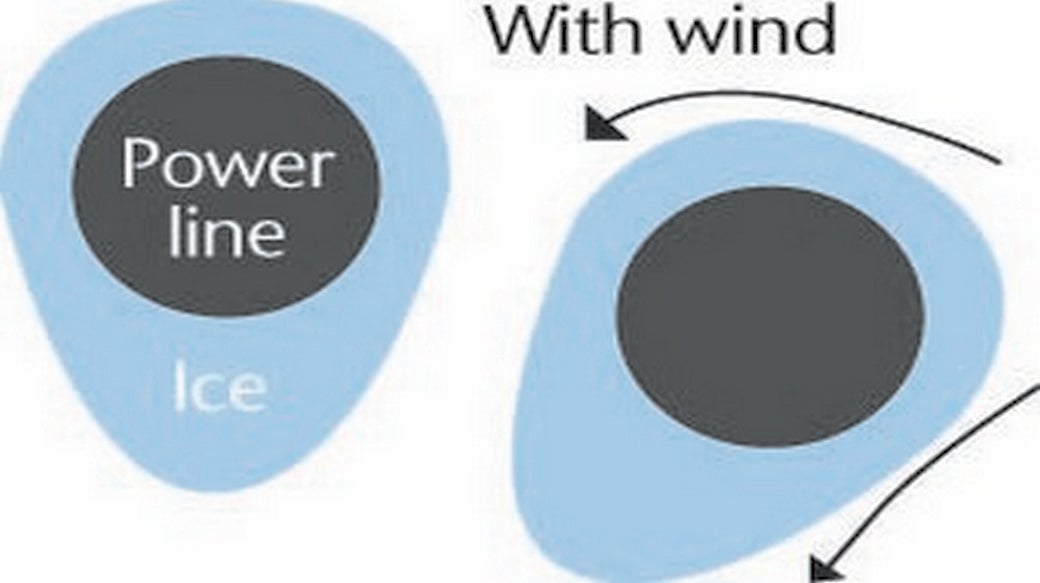 The time of day is also important, there is a marked drop in ice accumulation from noon to 6 pm due to solar radiation effects. Events before or after these hours are more likely to be significant.

Wet snow can cause ice accumulation on equipment because it is made up of partially melted snow crystals which can stick to the surface and freeze upon contact. A wet snow icing event followed by a cold snap with very low temperatures can cause strong accretion of ice that can persist for an extended period of time (days).

In-cloud icing occurs when super-cooled water droplets in the cloud come in contact with a surface (transmission conductor or structure) and freeze on impact. Not only is in-cloud icing the most common type of icing on transmission lines in higher elevations, it also has the most significant impact with pro-longed events lasting over 24 hours, and significant ice accumulation is possible. In-cloud icing is dependent on the height of the cloud base.

In-cloud icing is the most complex type of icing because it can result in two types of ice accumulation.

In the first category, in-cloud and precipitation-based icing can occur at the same time resulting in a heavy glaze ice accumulation. In the case of rime icing, accumulation is dependent on the water droplet size, wind speed and atmospheric moisture content. Forecasts for in-cloud icing are challenging and typically come from private sources. 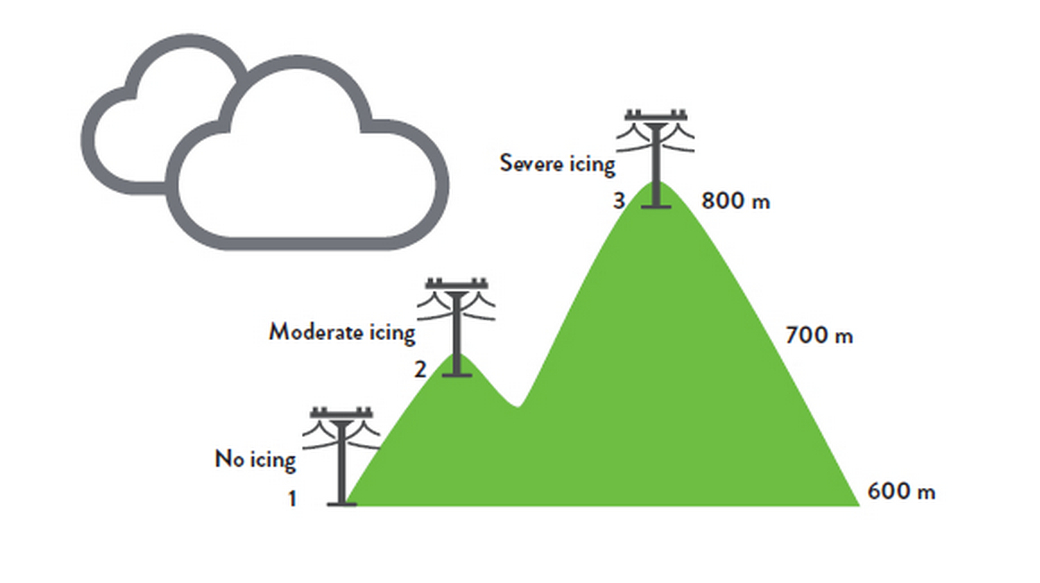 Icing from freezing fog and mist results in a soft rime accumulation which has the lowest density of the ice types and often has a frosty appearance. This type of icing is more common in the central and northeast United States in the mid to late winter. One common scenario when freezing fog occurs is when an arctic cold front with shallow, dense air undercuts a warmer, moist airmass in place causing lift, clouds and in some cases, even freezing mist/fog. Another example would be when a warmer, moist airmass is transported into a region with snow cover. Cooling occurs, the airmass becomes saturated and fog develops. At that point the tiny water droplets of fog can freeze onto the cold, surrounding surfaces.

Long duration events, greater than six hours, are critical. Events lasting 1-2 days should be of greater concern. Wind is again important primarily because it causes a greater mass horizontal flux of water droplets to the equipment or wire increasing accumulation. If the freezing fog event lasts a day or more the ice accumulation could become great enough to trigger galloping in the right wind conditions. Even on overcast days the ground absorbs solar radiation which can raise temperatures a few degrees which could warm conductors. Therefore, these events are more impactful if there is snow cover and if the temp is below 30 degrees during the event. 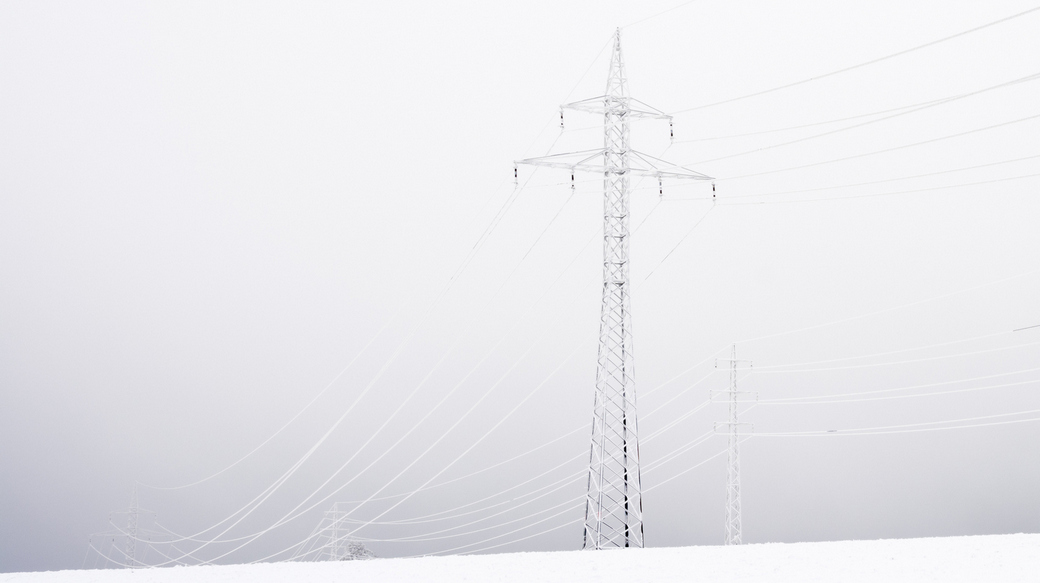 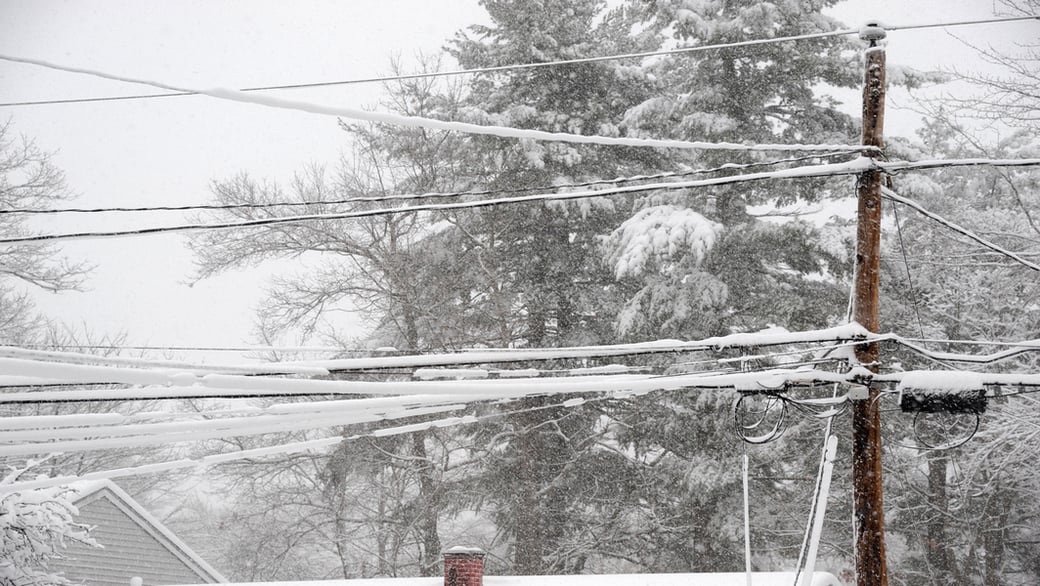 Ice and frost accumulation on power lines during the winter season can pose significant issues for utilities and their maintenance crews. When combined with high winds, the threat can become serious. 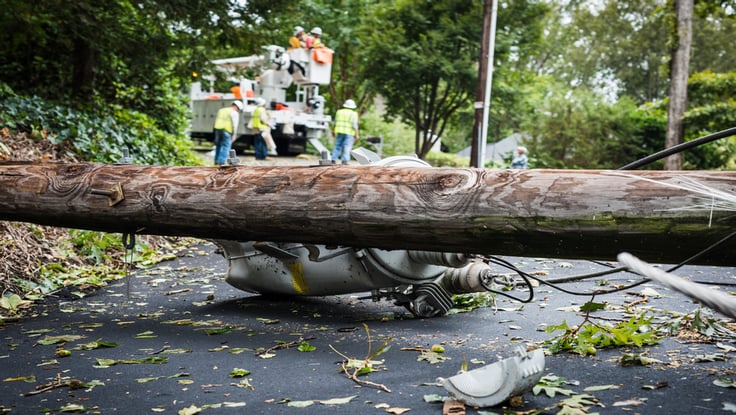 Utility and HP gas transmission operators need a tool that gives them the power to set the severe weather alert thresholds that make sense for their operation, based on the location of each of their assets.

Severe weather can seriously threaten utility operations and employee safety. See how Indji Watch can help you be proactive in making informed decisions on hazards that threaten your utility organization. 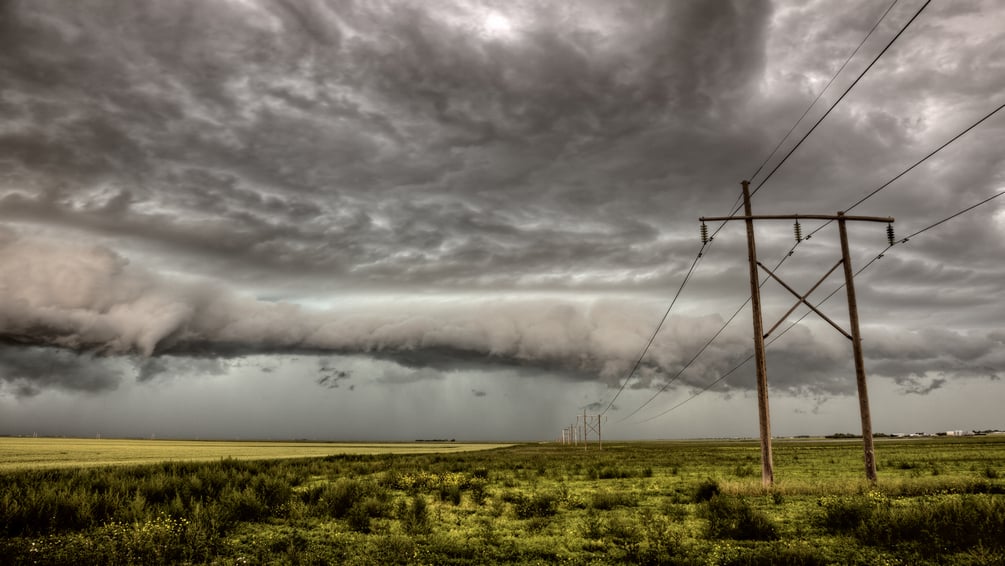